A Long Tradition of Service

The Marshall & Erlewein Funeral Home, located in Dublin, Indiana was originally known as the Doll Funeral Home, owned by Robert Doll (1915-2001). Bob operated the business from 1947 to 1972 when it was purchased by Jerry and Corena (Fink) Marshall. Both are graduates of Lincoln High School in Cambridge City and Jerry a 1967 graduate of the Indiana College of Mortuary Science. Jerry and Corena operated the funeral home until their daughter Regina and their soon to be son-in-law, Chris Erlewein joined them in 1987.

Regina grew up in the funeral business and graduated from Lincoln High School in 1983, and Chris graduated from Connersville High School with the class of 1980 and went on to graduate from the Cincinnati College of Mortuary Science in 1987. Chris and Regina were married in 1988 and are the proud parents of Max, Madeline and Macy.

In 1991 we opened a funeral chapel in Lewisville so families West of Dublin in Henry and Rush counties would have a more convenient location to conduct funeral services from. With foresight to the changes coming in funeral service involving the trend to include cremation, we installed the area's first on site crematory at our Lewisville location. By operating a crematory we can provide full attention to detail while giving peace of mind to the families we serve. In addition, we can also furnish a convenient crematory location to our select funeral home customers that share the same high standard of service and detail so that they, too, can give their families the peace of mind of knowing that the cremation process will be conducted by a licensed funeral director, who will always give the deceased the dignity and respect they deserve.

Chris and Regina purchased the funeral business from the Marshall's in 2006. As a full service funeral home, we take pride in being able to provide families dignified, small town, family service in a home-like atmosphere at a time when family is most important. Not only do we have a history of service,  but we also look forward to the future and the privilege of assisting area families through the most difficult time of their lives. You can trust in us to provide you with compassionate guidance with your best interest in mind, and the confidence of knowing that we are here for you today and in the future. 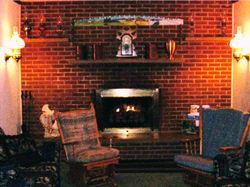